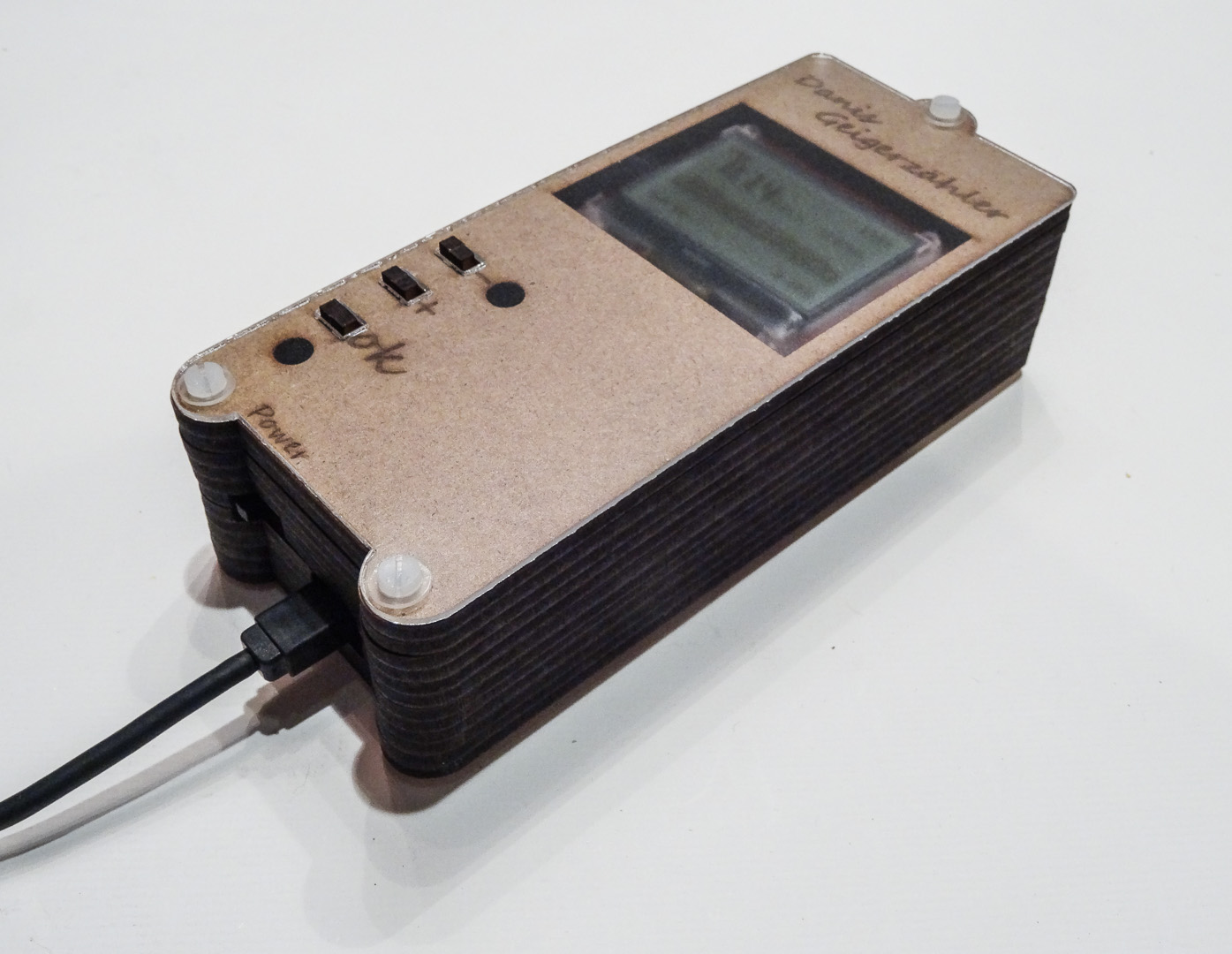 [En] Building a case for a “MyGeiger” Geiger counter

While looking for a Geiger counter, I quickly realized that it is difficult to get some device with some functionality for a decent price.

Eventually I found a kit called MyGeiger, sold by RH ELECTRONICS: http://www.rhelectronics.net/store/diy-geiger-counter-kit.html. The electronics are sold as kit or fully assembled.

RH Electronics sells as well Geiger tubes (not included in the kit).

Unfortunately they do not sell any case for the electronics, therefore I decided to build one on my own.

At the beginning I wanted to print a case with a 3D printer, but there are some major drawbacks with 3D printing:

The other idea inspires of the Raspberry Pi case Pibow TFT, I ordered a while ago. It looks like this:

This case is made of cut plastic slices which were stacked and screwed together.

At the Fablab in Luxemburg I could use a professional laser cutter. A friend borrowed me some 3mm MDF wood and 1.5mm Plexiglas.

One way of proceeding is drawing the case in 3D and the cut it in slices. The other way is drawing the slices directly in 2D. I prefer the 2nd method, for me it is easier.

The lase cutter can handle SVG and AI (Adobe Illustrator) files, both vector formats. For cutting elements out, surfaces have to be closed. The driver and tools for the laser cutter calculates the paths to follow with the laser.

I decided drawing the slices with Microsoft Visio, because I know this tool very well.

The main difficulty creating a sliced case is avoiding elements in suspension. I started with measuring all dimensions of the electronics:

Then I drew the boundaries of the housing and the slices:

The slices 0 and 1 shall be glued together in order to hold the plastic nuts. The other slices shall be screwed together with plastic screws.

In certain places, thin blades of 1x3mm will strengthen the structure. Especially slices 7 and 8 require this structural support because the slices a open. The blades are cut out of the scrap of slice 7.

The buttons shall hold in their guidance hole without additional means. Two layers of MDF shall be glued together in order to get the 6mm large buttons. The form of the cutouts allows holding back the buttons in place:

The drawings have to be saved in SVG format. Written parts have to be transformed in paths. I used Adobe Illustator for doing this, but Inkscape shall be capable of doing it as well.

The corrected drawings in SVG format can be downloaded here:

The cutting is done with a Cyborg LS-1080-K laser cutter. It has a laser capable of burning with 60W. The laser power can be programmed via the driver, as well as the paths to follow (based on our SVG file) and the cutting order. The text to be engraved on the wood is simply done by reducing the laser power. The fine tuning was fortunately done by the Fablab staff.

The cut parts are quite smelly in cause of the burned glue of the MDF. I got rid of the odor by placing the parts in the fresh air of by basement for nearly 3 month.

After cutting the raw material we got 12 parts in MDF of 3mm and one Plexiglas cover:

Parts for the case

First of all the 3x 2 parts for the buttons have to be glued together. I used some simple liquid wood glue which can be disposed with a brush:

After assembly of the two slices you can see how the buttons will be kept in the housing without being hold mechanically: the large part sits above the button on the PCB. The thin part looks out of the case and will be pushed by the user. The entire part is guided by the case.

Now the layers 0 and 1 have to be glued together with the liquid glue:

Until the glue fully dried, but something heavy on the assembled layers.

Layers 0 and 1 glued together

Having a look on the bottom side of the assembled part, the hexagonal cutouts for holding in place the nuts can be seen:

Hexagonal cutouts for the nuts

During the first assembly I realized that some parts have to be retouched before the final assembly.

All corrections described here are already done on the download SVG drawings.

First I had to get the border on layer 7 thinner next to the headphone jack by using a Dremel.

Then layers 6 and 7 got retouched at the button guides next to the buzzer.

Layer 5 got cut next to the USB.

The stabilizer of layer 4 got removed with pliers.

Before assembling the case, two power cables were soldered to the PCB:

The mechanical assembly starts with screwing the PCB on the spacers and then on the housing layer 0 and 1:

Assembly of the PCB

Then the power cables are soldered to the accumulator:

Soldering on the accumulator:

Soldering points on the accumulator

The battery in place

Eventually, a first powered test of the device:

Operating on USB with charging

Now the stabilizing blades have to be put in place:

Before putting the last wooden layer in place, the blades have to be cut using pliers (keep 2 to 3mm overhead):

Finally the Plexiglas can be put put on the case:

Screws and washers can now be placed and screwed:

Putting washers and screws in place

Putting the nuts in place

Final Look on the Case – Conclusion

The stability of the case is satisfying. Nevertheless there are some items which can be improved:

Theme by Anders Noren — Up ↑